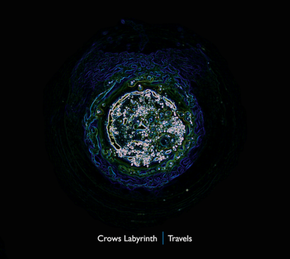 Crows Labyrinth is a dark ambient project, conceived by Theo Tol from the Netherlands. What started as an experiment in December 2011 turned out to become a real project that resulted in a full album. The experiment was simple but challenging: try to create ambient soundscapes by exclusively using bass guitars. As an extra challenge, every track should be recorded as one take, one flow of sound, one improvisation.
The result is Crows Labyrinth's debut album, titled "Travels". The album contains six long tracks, six sonic adventures in which the listener can get lost and discover new details and nuances with every spin, and a solo bass piece called “Below”, which is an exception to the pattern. This track was written more than ten years ago. Somehow the vibe of this piece of music fits perfectly on this album and also functions as an interlude to the final track of the album, “Heliograph”, which is a bit brighter in sound color than the other tracks on the album.
Later in 2013, Crows Labyrinth teamed up with UK post-rock artist Coma Cloud for a one-off track called "Sunrise Finale". The track was released in July 2013, featuring punchy post-rock grooves and hypnotizing ambient bass guitar drones.
One month later, Crows Labyrinth released "Gemini Sun": companion single or B-side to Coma Cloud's "Sunrise Finale" and features the isolated, full dark ambient bass guitar soundscape that was used in "Sunrise Finale". The track was improvised and recorded in one live take using a 5-string bass guitar and numerous effects.
Crows Labyrinth is inspired by many artists. These names are a small selection: Brian Eno, Robert Fripp, Tangerine Dream, Steven Wilson (with his Bass Communion and I.E.M. projects), Tom Heasley, Loscil, Clem Leek.


Hi Theo and how are you?

I am fine, thanks! I hope you're doing well too.

What's been happening in the land of Crows Labyrinth.

My latest single, "Gemini Sun", has been out now for about two months so I am more or less done promoting that track. Response to the track was pretty good, so that gives me confidence to continue with this project. Furthermore, I am slowly working on a live setup to get my music on the road. I am planning to do small show first for friends, doing living room concerts so to speak, and see how that goes and develop it further. And of course I am thinking about and experimenting with new sounds for new material. I have no clue yet when that will be released. Hopefully in the first half of 2014. We'll see how it goes.

I have to say, your sounds are very unsettling - I mean this in a good way. I like music that stirs emotions and your project certainly does that. What made you want to make Dark Ambient music?

It actually sort of happened spontaneously. In December 2011 I picked up one of my bass guitar and started experimenting. I was listening to ambient music for years already, but not exclusively to ambient music. I also like progressive and post-rock and like the melancholic music of bands like Porcupine Tree, Paatos and Sigur Rós, to name a few. And then you have the other projects that Steven Wilson (singer/writer of Porcupine Tree) works on like Bass Communion and I.E.M., which I love very much. If you add some ambient artists to that like Lustmord, Loscil, Clem Leek and the great Robert Fripp en Brian Eno, then you have an idea where my inspiration was coming from when I started to create my own ambient music.

Which three albums would you take to a desert island for 1 week?

For someone who likes so many bands and music genres, this is an impossible question to answer. But to stick more or less with the genres I have already mentioned, I would pick "Together We're Stranger" by No-man (with Steven Wilson and Tim Bowness), "Kallocain" by Paatos and "Graveyard Mountain Home" by Chroma Key. All three of these albums are very consistent, very well played and sonically of very high quality.

Your own music is very stripped down, just using Bass guitar. How did you choose this as your recording method?

Like I said earlier, that was more or less by accident. But when I had recorded two tracks, I started to realize that I wanted to follow a certain path with the creation of my music. My main instrument is the bass guitar, so I wanted to focus on using that instrument as much as possible. Furthermore I wanted to challenge myself in my creativity. I wanted to play very track in one take, completely improvised, producing one flow of sound. Of course I would take my time experimenting and creating the sound design for each track first before I pressed "Record", but from that moment everything had to happen on the spot, at that moment in time. One advantage of working this way is that I kept the possibility open to try this out live, which I will be experimenting with in the near future as I mentioned earlier.

Also, you record live and do all your music in one take. Another rare approach and how did this come about?

I was inspired by Robert Fripp's soundscaping music and also his collaborations with Brian Eno. Most of his/their tracks, especially the older work of Fripp & Eno, are done live and improvised. I like their art of spontaneous composing and got inspired by it. The keyword here is "serendipity": creating something beautiful completely spontaneously, sometimes even by accident. When I start working on a new sound design or a new track, I am starting the process with a completely blank slate and have often no idea where my creativity will take me. Sometimes I start of with a vague idea in my head and end up with something completely different along the way. I love this aspect of working the way I do currently.

If you had to choose one of your own tracks to introduce someone to your music, which would you choose?

My personal choice would be the second track from my debut album: "Influx". It's dark but accessible at the same time. It has a good low end and lots of space. One tip: listen to it with headphones to immerse yourself even more in the dark soundscape.

I would like to thank you for the interview and giving me the chance to talk about my music and this project. Take care and until next time!