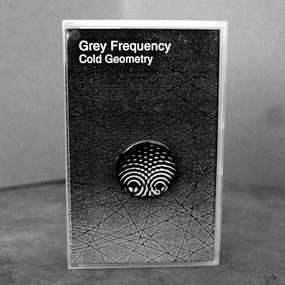 To date, Grey Frequency has recorded two full-length albums: 'When Do We Dream' (2012) and 'Cold Geometry' (2013), which have both been self-released.

How did you choose the name Grey Frequency for your musical project?

I was playing with an old shortwave radio, tuning in and out of stations and putting them through an FX pedal. The sounds coming out of this set-up were quite atmospheric: ethereal and somehow haunting. To me, the tone suggested something grey- voices and sounds, obscured in a fog of echoing radio static. So, the name kind of came from that.

Your Cold Geometry album was released on cassette tape. In this day and age of virtual media what was the response like to a release on this format?

The response to the cassette has been positive and I had a lot of fun putting the package together (with the artwork, button badges and everything). I was keen to put a tape out, as it harked back to the source material and the whole recording process. I really like the soft, analogue sound you get with tape…  There seems to be a lot of love out there for older music formats, which I certainly appreciate. I’d very much like to put out a vinyl release at some point in the future.

Do you play live or have any gigs planned?

I haven’t played live yet. It’s something I’d really like to do, though. Soon, I hope!... Good or bad, it’d be great to get feedback from a real-life audience. If any venues or promoters are interested, please get in touch!

Who are your musical influences?

I like a lot of different musical genres: punk, electronic, ambient, noise, rock, pop, film scores. So I guess my influences are quite varied. It’d be pretty hard to pin-point a single thing really (or even make a list of things!). Whatever sounds you’re exposed to will always have an influence on the music you create, to a greater or lesser extent. With this project, I never sat down and consciously thought ‘right, I’m going to do something that sounds like whoever’. It was only after making the first album that I discovered other artists who we’re producing sounds in a similar vein. Grey Frequency just naturally came out of experimentation. The labels are added afterwards.

What instruments/software do you use to create your sound?

The tracks are created using a series of cassette players feeding through guitar pedals. When I produce a track, all the individual layers are put onto audio cassettes then played through a mixer. For the first album (‘When Do We Dream?’) there was a strong random element involved- I didn’t know which layers were on which cassette. The latest album has ended up more structured and considered, though…  I use found sounds, which are taken from on old tapes. I spend an unhealthy amount of time digging around charity shops and car boot sales. I have discarded tapes full of domestic recordings, like family conversations and stuff taken from the TV- all from an era when the cassette recorder and microphone were the latest piece of household technology. I also do a lot of field recordings, which go into the mix. For the ‘Cold Geometry’ album I introduced some acoustic guitar and a recorder. I’ll use anything that creates an interesting pallet of sounds.

If you could play a gig with two other bands, which would you choose?

Empty Whale and Mytrip- light and dark of the same ambient coin.http://emptywhale.bandcamp.com http://mytrip.bandcamp.com

What is the best gig you have ever attended and why was it so special?

I’ve been to so many gigs in the past; it’s really difficult to single out one in particular. I saw Nitzer Ebb at Nottingham Trent Polytechnic in the ‘80s. They had this brutal, raw energy that I found really intoxicating at the time. It was one of the first gigs I’d been to that felt really ‘hardcore’ and maybe a bit dangerous! So, that really sticks in my mind... Another time a friend and I wandered into this basement studio where there was a sort of open mic jam session going on. At one point there was this wonderful drone thing happening with two guys on laptops and a guitarist. It was totally hypnotic and felt like time had stood still.

What does the future hold for your project?

I’m going to carry on recording and expanding the Grey Frequency sound. I’m also going to continue developing the video / visual side of the project… I’d like to do some collaborative work with other musicians or video artists, and also take my first steps towards performing live.